The Owl House Wiki
Register
Don't have an account?
Sign In
Advertisement
in: Article stubs, A to Z, Groups,
and 4 more
English

View source
— This article is a stub. —
You can help The Owl House Wiki by expanding it.

"Labyrinth Runners"
An abomination is a magical golem construct made of a typically purple ooze-like substance created by witches to do various tasks.

Abominations have a crude humanoid appearance and behavior. Their bodies have such a very poor structure that maintaining a consistent form is a struggle enough. Most abominations fall apart easily, but witches with stronger magic can keep the abomination stabilized and make it larger and more durable in combat. Abominations that exhibit an overly-disproportionate appearance or have multiple limbs or appendages where there shouldn't be are deemed as failures.

Created by reanimated matter, abominations serve as labor on the Boiling Isles. Their low sentience ensures abominations will recognize and obey the commands of their summoner without developing any rebellious tendencies. Though abominations fall apart easily, they can easily reform themselves, allowing them to perform dangerous tasks with minimal risk. However, Incident #3421 of Eda's Hexside write-ups indicates that abominations can gain full sapience and revolt against their creators. Multiple abominations can also combine into a single form to increase their size and power.

One notable witch, Alador Blight, has managed to integrate abominations into his products at Blight Industries and even engineered the Abomaton, an robotically-enhanced abomination. 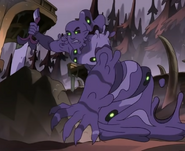