The Owl House Wiki
Register
Don't have an account?
Sign In
Advertisement
in: A to Z, Groups, B

Bards Against the Throne

Bards Against the Throne

Rebranded as the Covens Against the Throne

"Agony of a Witch"

The Bards Against the Throne, also known as the BATs, were an organization of witches rebelling against Emperor Belos' Coven System. They have since been succeeded by a new group, the Covens Against the Throne, retaining all the original members and gaining some new ones.

True to their name, the BATs mostly consist bard witches who specialize in a musical instrument and are all practitioners of bard magic. The BATs outfit consists of black boots, red pants, and a black vest with gold buttons and a maroon collar. To mask their identities, the BAT members wear a large bat mask, that covers most of their faces and their chins and mouths.

At some point during their young adult years, Raine Whispers skipped a performance due to their stage fright, opting to hang out with their best friend Eda Clawthorne. Eda advised her friend that they couldn't run from their problems forever and added that it would be better to "give them a whap in the face."

At first, Raine thought their best friend was joking around, but after spending some time as a Bard Coven teacher, they would see firsthand how Emperor Belos forced witches to join covens against their will; anyone who refused to join would seemingly disappear. Disagreeing with the Emperor's forceful methods, Raine took matters into their own hands by carefully moving up the ranks of the Bard Coven, finding like-minded witches to join their cause. Eda's advice and a desire to stop the Emperor's plans led to the formation of the Bards Against the Throne.[1]

During on of their public appearances, the BATs find themselves surrounded by members of the Emperor's Coven, but manage to escape with the help of Eda Clawthorne. The Owl Lady, thanks to her previous relationship with Raine, would join the ranks of the organization and aid in the various raids conducted by the BATs. However, one of the raids goes wrong when Abomination Coven Head Darius and Beast Keeping Coven Head Eberwolf set a trap and capture Katya, Derwin, and Amber. Raine would also be captured while taking the fall for Eda, leaving the Owl Lady as the only member.

As of "O Titan, Where Art Thou", they have been succeeded by a new group, the Covens Against the Throne, retaining all the original members, and some new ones, including Darius, Eberwolf, Lilith Clawthorne, Steve, King, and Luz. It is also revealed that the trap set by Darius and Eberwolf was actually to keep Raine safe. 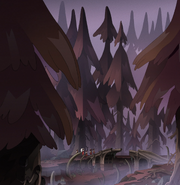