She also voices Tinella Nosa and a younger King in "Echoes of the Past."

Terrace graduated from the School of Visual Arts in New York during the spring of 2013 and subsequently moved to Los Angeles after getting hired as a storyboard revisionist for Gravity Falls.

After finishing work on Gravity Falls, Terrace became a director on the first season of the DuckTales reboot. She is currently creating and executive producing her own series, entitled The Owl House, for Disney Channel. 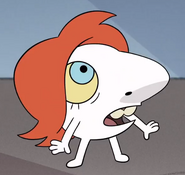