The Owl House Wiki
Register
Don't have an account?
Sign In
Advertisement
in: Article stubs, A to Z, Groups,
and 3 more

View source
watch 01:25
Jurassic World: Dominion Dominates Fandom Wikis - The Loop
Do you like this video?
Play Sound
— This article is a stub. —
You can help The Owl House Wiki by expanding it.

Hexside School of Magic and Demonics

"Any Sport in a Storm" (debut)

The Emerald Entrails are a flyer derby sports team at Hexside School of Magic and Demonics lead by their captain, Willow Park.

The team mainly wears various shades of green with their uniforms, which are unique to each member. The overall look is a green sleeveless shirt over another shirt, shorts, and their usual shoes. Every member also sports green face-paint.

Willow Park forms the team for the club fair, and at first has trouble finding people for the team. When Hunter goes to Hexside as "Caleb Jasper Bloodwilliams" in search of new recruits for the Emperor's Coven, he meets Willow, and joins her team after some convincing. After their victory, Hunter names the team the "Emerald Entrails". Shortly after, he reveals that he is the Golden Guard, and Darius sends the Coven Guards to collect them. They are then placed in a cell and their palismen are taken from them. Darius later has them teleported onto his ship, but Hunter rescues them, and the ship crashes.

Willow, Gus, Viney, and Skara attempt to escape, but Darius stops them. However, Hunter convinces him to let them go, saying that they are unfit to be the Emperor's Coven. Darius then reveals to Hunter that he was going to bring the students back to Hexside anyway, as the Emperor's Coven has enough recruits. The Entrails later run into Luz Noceda and Amity Blight and show them a picture that they had taken with Hunter after their victory.

Later, when Adrian Graye Vernworth leads a team of Coven Scouts to Hexside and captures Gus and Hunter, Viney and Skara rescue the latter, who explains why he is in the school. Willow takes his word for it, and they partake in defeating the scouts and driving them and Graye out of the school. 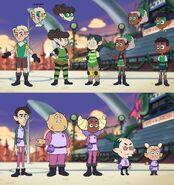