For The Owl House, he voices Gus Porter.

Brown began his life of fame at the age of 6, when he competed in America's Got Talent before he was eliminated prior to the quarterfinals. He then moved on to works like Sam and Cat, his first onscreen appearance, Black-ish, and the Kim Possible movie adaptation as Wade. He currently lives in Los Angeles, California, where he works on numerous Disney affiliated TV shows. 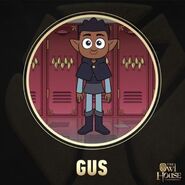