For The Owl House, she voices Amity Blight.

Whitman was born and raised in Los Angeles, California, where she started her Hollywood career at age two with a voiceover role in a Tyson Chicken commercial. She landed her first movie role at the age of six in the movie "When A Man Loves A Woman". She is best known for the role of Katara in Avatar: The Last Airbender, Tinker Bell in the Disney Fairies films, and Amber Holt in Parenthood. She is the child of voice artist Pat Musick and set construction coordinator Jeffrey Whitman. 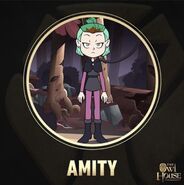