The Owl House Wiki
Register
Don't have an account?
Sign In
Advertisement
in: A to Z, Characters, M,
and 4 more

"Through the Looking Glass Ruins"

People entering the Forbidden Stacks
Firing Amity Blight
“
I'm just like, super disappointed in you. Like, I can't even process these feelings right now. Gosh, it's so hard for me to say this, but like, you're fired.
”
—Malphas to Amity, "Through the Looking Glass Ruins"

Malphas is a minor character in The Owl House. He is the master librarian at the Bonesborough Library.

Malphas is a large humanoid bird-like creature who towers Luz in size. He has bluish-gray skin, a hunched back, and a bird-like face with glowing yellow eyes. He also has two tassels hanging off his beak and a pair of large, gray wings he can use to cloak himself. He appears to have two small horns on his head. He is primarily seen riding on top of a large book with the word "Staff" on its binding. He wears a black cloak with a purple top, along with a pair of reading half-moon glasses. His hands have five digits.

He, like a majority of the library staff, has a gold medallion with a symbol of a book. When his appearance is obscured by his wings, he gives the appearance of having one eye.

Malphas is a kind and reasonable individual, but can be incredibly intimidating and strict when he needs to be. He seems to be rather talkative.

As Master Librarian, Malphas is charged with hiring various library employees and is the only librarian authorized to enter the Forbidden Stacks; anyone who trespasses the Forbidden Stacks will either be fed to the bookworms or fired. One of his employees, Amity Blight, was given the task of reading books to children as well as a private study where she could spend time away from her family.[1]

However, Malphas caught Luz and Amity sneaking inside the Forbidden Stacks. Much to his disappointment, he promptly had Amity fired. However, Luz managed to convince the Master Librarian to hire Amity again by completing a few trials, such as categorizing man-eating bugs and taming a paper dragon.[2]

Malphas' name and appearance are inspired by the Goetic demon of the same name from the Ars Goetia. In demonology, the demon is described as a Great President of Hell that appears as a raven or crow that grants his conjurer buildings and the destruction of enemies.

Malphas is voiced by Fred Tatasciore. Malphas shares the same voice actor as another librarian of the Bonesborough Library, Gary.[1]

Malphas debuted in "Through the Looking Glass Ruins". 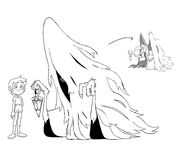 Malphas (face covered) with Luz to scale by Marina Gardner.

Malphas on his book by Marina Gardner.

Concept art of Malphas catching Luz and Amity in the Forbidden Stacks by Marina Gardner.