The Owl House Wiki
Register
Don't have an account?
Sign In
Advertisement
in: A to Z, Characters, O,
and 9 more
English

"O Titan, Where Art Thou" (mentioned)

To maintain the image of the Blight Family

Being in control
Amity's hair being green

"Didn't you hear me? It won't rest until its enemy is completely eliminated."
“
We're just trying to teach our daughter a valuable lesson in business.
”
—Odalia Blight, "Escaping Expulsion"

Odalia Blight is a character in The Owl House. She is the CEO of Blight Industries, the wife of Alador Blight, and the mother of Edric, Emira, and Amity Blight.

Odalia is a witch with a curvaceous build contrasted by the sharp features in her face. She has tufted hair similar to Amity's, but it is two-toned mint green, a trait she shares with two of her eldest children, Edric and Emira, with a lighter streak across the top. Unlike the rest of her family, Odalia has blue eyes.

As a child, she strongly resembled Amity, but with natural green hair that was in the same hairstyle as it is in adulthood.

She wears a violet blouse with a white petticoat that has a three interlocking orb pattern, navy pants, and gray heeled boots.

In Amity's youth, she is seen wearing a dress in a low-tied bun.

During her days as a student at Hexside, she wore a Hexside school uniform with purple sleeves and leggings as a member of the oracle track.

Odalia's hairstyle is tied into a bun, reminiscent of a Roman nodus. She accessorizes with a necklace with a pink, oval gem that matches the one Amity used to wear, purple lipstick, and golden earrings.

As a businesswoman, Odalia is a controlling woman whose haughty and elitist thinking makes her a domineering influence to anyone around her, including her family. She is shown to be highly concerned about her family's reputation, so she will interfere with her children's personal lives and opinions to ensure they stay in line, even silencing her own children when they wish to speak in the matter. This is evident by how she uses her oracle magic to telepathically keep Amity in line via matching amulets that allow Odalia to directly speak to Amity in her mind. Additionally, it was Odalia who forced Amity to end her friendship with Willow due to her weak magical abilities and lower social status, making her be friends with Boscha and Skara instead since they came from more respectable families.

Odalia claims to be an honorable woman, always reciting her family's motto, but when things don't go her way, she can be tempted to go back on her word. When something doesn't end up going her way, she has to be told how it can potentially benefit her. Not only under-handed, Odalia has a duplicitous side in how she offered to let Luz, Willow, and Gus back into Hexside if Luz assisted her and her husband with a demonstration of their company products, but it appeared to have been a plot to eliminate Luz completely. She is also greedy, which shows that she was obsessed with money when she loses her temper with Amity when she ruined a presentation and lost the support of potential investors as a result.

Odalia was once a student of Hexside School of Magic and Demonics enrolled in the oracle track, attending the school at the same time as Eda Clawthorne. She was friends with Alador, in addition to future Abomination Coven leader Darius, and attended the Emperor's Coven tryout between Eda and Lilith Clawthorne.[1] At some point, she married Alador and became the mother of three children: Emira, Edric, and Amity. Due to the high status of the Blight family, both Odalia and Alador disapproved of Amity's friendship with Willow Park and forced their daughter to disassociate from Willow.[2] At some point, Odalia had Amity dye her hair green so that she and her siblings could have matching colors.[3][4]

Alador is Odalia's husband, and they have been together since they were both studying at Hexside. Odalia seems to care about her husband, as she is seen giving him words of encouragement while he's busying trying to create the perfect Abomaton, and also praising him for his work after the product event. Odalia also obeys her husband, as seen when Alador reminds her that she has to uphold her promise to Amity because a Blight always upholds their end of the deal; she obliges, saying they have to do what is best for the family. Despite all that, Odalia is also annoyed at her husband's tendency of getting distracted easily, such as facepalming herself when she realizes that Alador is off chasing a butterfly and not listening to her.

Although it's shown that Odalia cares for her daughter, since she makes lunches for Amity when she goes out and packs them in cute lunch bags, as well as having Emira and Edric pass the bags to her when she forgets to take them, the relationship between the mother and daughter proved to be much more strained, if not downright unhealthy, than it lets on. "Understanding Willow" made it apparent that Odalia mostly saw Amity as a means to preserve their family's reputation above all else, and even damaged Amity's friendship with Willow in the past for that purpose. Amity's diary entry where she unintentionally addressed one of her teachers as her mother in "Lost in Language" hinted that their relationship is still as awful as ever despite the aforementioned display of affection, and that Amity wished Odalia truly loved her. This is more covered in "Escaping Expulsion" when Amity is warned by Odalia not to mess up the demonstration for Blight Industries investors, but when she does, Odalia vehemently scolds her. Seeing the Grom photo also makes her proceed to force Principal Bump to expel Luz, Willow, and Gus from Hexside, deeming the trio as a distraction to Amity, much to her dismay. In order to make sure Amity stays under control, Odalia gives her double the classes as punishment. When Amity rebels from her and stops the Abomaton from harming Luz at the second Blight Industries demonstration, Odalia is about to punish her again, but Amity breaks her necklace, severing her mother's telepathic connection with her. Following this event, Alador stops her from harming her daughter.

Amity reveals in "Lost in Language" that Odalia has a clear bias toward her son and eldest daughter, hinting that she doesn't view Amity with such high regard as she does with the twins. However, the twins do not share the happiest relationship with their mother either; they dyed Amity's hair purple willingly, despite Edric knowing Odalia would be furious about it.

It's yet to be revealed whether Odalia and Willow ever interacted, but owing to the difference in their social status and why she forbade Amity from befriending her to begin with, it's clear that she disdained the Park family as a whole for not being an influential family as much as the Blights.

Although Luz and Odalia barely know each other, it is shown that she is not very fond of her due to the fact that she indirectly caused her company to lose money by supposedly "distracting" her daughter from putting on a good show of their product. She even made Luz pay for her daughter's mistakes by having her, Gus, and Willow expelled from Hexside so that she could put Amity back in her place. When she was confronted by Luz and made the point that she would still be friends Amity and thereby still be a distraction to her, she planned to have her eliminated by getting her to take Amity's place in the company's show under the guise that she would let her, Gus, and Willow back into Hexside if she makes her show a success. This is evident that when the Abomaton 2.0 was already showing itself to be a successful product; she did not do anything to stop it, because it is supposed to have its enemies completely eliminated for it to stop and it would have worked if her daughter had not arrived in time to stop it.

Just like with Luz and Willow, Odalia does not view Gus with a high regard and deems him, along with the aforementioned two, a distraction to her daughter. This leads her to expel him, Luz, and Willow from Hexside.

In the past, they have worked together in unknown terms of business. It is also unknown about their status in the present.

Odalia's name is originated from the Germanic name odalys, which means "wealth". This fits her, as the Blight family is very affluent. The name of Odalia was first revealed in a charity stream hosted by Dana Terrace on September 16, 2020.[5]

Odalia is voiced by Rachael MacFarlane.

Initially mentioned in "Lost in Language", Odalia made her first on-screen debut as a silhouette during a flashback in the episode "Understanding Willow". She also appeared in the flashback from "Young Blood, Old Souls", albeit initially unconfirmed.[6]

She made a full-time appearance in the second season, in the episode "Escaping Expulsion". 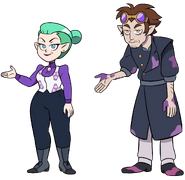