The Owl House Wiki
Register
Don't have an account?
Sign In
Advertisement
in: A to Z, Objects, P,
and 3 more
English

"A Lying Witch and a Warden"

"King's Tide"
A palisman (plural form: palismen) is a sentient magical totem that is bonded to a witch as their familiar. The palisman acts as a staff, and are acquired by the witch as part of their education. Palismen can prove to be both a loyal friend and a powerful magic-enhancer, acting as an external source of magic for use in spells, transportation, weaponry, among other functions.

The only named palismen in the series so far are Owlbert, the Bat Queen, Hawksley, Frewin, Ghost, Clover, Flapjack, Emmiline, and Maya.

Palismen are made from an enchanted plant called palistrom, generally in the shape of an animal or magical creature. Upon being carved, they gain life and sentience, and are bonded to the one that created them. They are the Boiling Isles' equivalent of a familiar, while also acting as magical staves that house their own source of power outside a witch's bile sac.[1] Because of this, palismen are capable of using the magic stored within them as well as a witch can.[2] Although they provide great magical power, that power still requires the user to have previous knowledge of magic to cast a spell.

Despite acting as a witch's staff for the most part, a palisman is an independent, sapient entity capable of having consciousness. They can detach themselves in staff form and act on their own. Most palismen choose loyalty to their witch and have a close bond with them. Any given palisman can disconnect in their staff half via a unique interlock that mates it to only their own staff and no other.[3] Although the staff occasionally manifests as a separate piece, palismen such as Owlbert, Frewin, and discarded palismen have shown they can transform into staffs and back,[4][5] which suggests the staff may be an extension of the palisman itself. All staffs can also be used to fly, making them a witch's main source of transportation.[6] A witch can summon their staff by command, or conjure them from thin air when needed. While in flight, winged palismen may animate and begin flapping their wings.

While a witch and their palisman are joined by a relationship of affection and mutual respect, the palisman will leave if the relationship is harmful to them. A witch can also abandon their palisman if the staff suffers irreparable damage or loss.[3] A palisman can return to their witch if the witch proves that they can be trusted again, or if the lost/damaged staff is repaired or replaced. Otherwise, the palisman can become the partner of a new witch whom they find to be worthy.[4]

Traditionally, witches in their teens will carve their own palisman and staff from palistrom wood, at school or with parental supervision as part of their education. However, palistrom trees have become an increasingly rare resource and the ones that are left are heavily guarded. As a result, a system of palisman adoption has been instituted by Principal Bump and the Bat Queen. During this process, a young witch will step forward and speak their greatest ambition, and if a palisman is compatible with the emotion of that ambition, they will step forward to meet their new partner.[4]

Their nature as both living creatures and objects is an interesting case, as while having the ability to turn into an object and can be damaged or cracked, it is shown in "Hollow Mind" that palismen have souls. In this sense, they have the properties of a living creature but can also function as an object. Furthermore, the Bat Queen, despite her being a palisman, has had offspring of her own and lives as a well-recognized and prestigious demon. This implies that palismen are capable of living just like every other creature on the Boiling Isles, although this may simply be a consequence of the Bat Queen's unique origin as the palisman of an ancient giant.[3] 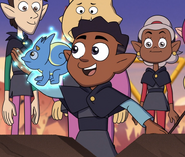 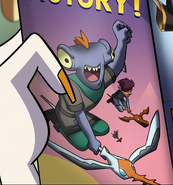 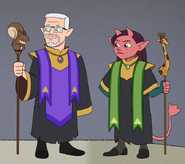 "Any Sport in a Storm"