The Owl House Wiki
Register
Don't have an account?
Sign In
Advertisement
in: A to Z, Characters, T,
and 4 more

"O Titan, Where Art Thou" (flashback)

To kill King (ongoing)
To release "The Grand Huntsman" (ongoing)

Luz Noceda
King
Hooty
Tarak is an antagonistic character of The Owl House. He is a tall, bearded witch and Titan Trapper who wants to kill the last remaining Titan, King.

Tarak is a tall witch who wears a skull resembling King's, but cracked, with curved horns and long fangs. He has dark skin with a long black and gray beard down to his legs and big red eyes with yellow sclera. Two large black wings can be seen on his back, and beneath them a long furry tail; likely Titan Trapper attire, though no others seem to wear similar wings.

Tarak wears a long black dress or robe with three brown triangles on top of it, a yellow garment on his shoulders with dark marks, long yellow sleeves, and a purple gem on each of his hands.

Tarak has the right side of his face being dark blue and markings/tattoos of a blue star and jade moon on his forehead.

Tarak is formal in an old-fashioned way, evidenced by the fact that he hand-delivers a letter to King's mailbox by way of introduction but does not see King himself. When he meets King, he is very kindhearted to him and responds delightfully to his eagerness over his "kin". However, once it is revealed that Tarak is a Titan Trapper, his friendliness turns to hatred, and he shows no remorse in his attempts to have King, Luz, and Hooty killed.

Somewhere in a remote part of the Boiling Isles, Tarak parked a caravan and watches Eda's livestream on Penstagram from a scroll. At the end of the livestream, he sees King's message to his father. Tarak was amazed by the livestream, but he didn't realize that King was a real Titan, instead suspecting that he was the son of another Titan Trapper. This prompted Tarak to contact King.[1]

Tarak travels to the Owl House, where he happens upon Hooty, and requests the house demon to deliver a letter to King for him. He then leaves, failing to notice Hooty accidentally eating the letter moments after because he got distracted by a bug.[2]

Tarak later welcomes King, Luz, and Hooty when they travel to Titan Trapper Island and shows them around. Once Bill tells him that King is a Titan, he takes him to be killed at the "ritual", which is actually used as means to summon the Collector. When Luz and Hooty help King escape, he chases them with the rest of the crowd and removes his "skull", revealing that he is in fact a witch.

Tarak was taken aback when he saw King's message to his father; however, he suspected that King was the son of another Titan Trapper, so he sent a letter to him, inviting him to Titan Trapper Island. He welcomed King warmly and showed some concern for him. However, when Tarak learned from Bill that King was a real Titan, Tarak's kindness turned to hate and possibly fear as well due to Bill's claims that Titans were evil monsters. This led to him showing no qualms about trying to kill King, calling him a "wretched spawn" during the chase and angrily stating that King was never one of them.

Tarak highly respects Bill for his knowledge about Titans, though Bill seems mildly annoyed by him. Although he greatly respects Bill, he became suspicious when Bill accidentally said that if they managed to free the Collector by sacrificing King, he would have all the rum to himself. When Luz and Hooty questioned what else Bill had lied about about, he told the other Titan Trappers that he wouldn't lie, but Tarak was still skeptical, showing that Bill's stuttered answers hadn't convinced him.

Like the rest of the Titan Trappers, Tarak worships the Collector under the name of the "Grand Huntsman".

Tarak made a silent debut in "Eda's Requiem" before making his speaking debut in "Knock, Knock, Knockin' on Hooty's Door". 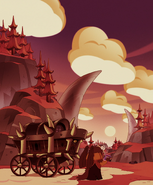 Tarak watching Eda's Penstagram livestream on his scroll with the caravan beside him.