Prudence Blackwood in Chilling Adventures of Sabrina
Gaia in The 100
Addie McCallister in The Emoji Movie
Jo Braddock in Uncharted
Tatiana Gabrielle Hobson (born January 25, 1996), professionally known as Tati Gabrielle is an American actress. She is known for her roles as Gaia on The CW science fiction television series The 100, as Prudence Blackwood on the Netflix original series Chilling Adventures of Sabrina and as Jo Braddock in Uncharted.

For The Owl House, she voices Willow Park.

Gabrielle began her career in the spotlight at age three, when she began modeling. By age five, she had already become a model for Macy's and Nordstrom.

She was raised by her Korean-American mother.

Gabrielle studied at the Oakland School for the Arts. She received many awards for the productions she produced and directed during her time at the school. 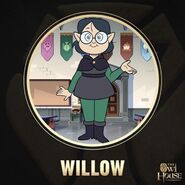