View source
watch 01:25
Jurassic World: Dominion Dominates Fandom Wikis - The Loop
Do you like this video?
Play Sound
— Non-canon content —
This page contains concepts or material that is not confirmed canon to The Owl House. It may contain canonical elements in the official timeline, but it is not developed in it.

When Eda and Lilith from The Owl House disagree over which spooky snack to bake, they soon find themselves in a creepy cooking competition that really takes the cake!

Alternate Synopsis: Eda and Lilith disagree over what spooky snack to bake, leading to a creepy cooking competition.[3][4]

Eda and Lilith are reading a cookbook entitled "Deathly Delights"; Eda wants to cook an unknown lime dish in a green pot, while Lilith wishes to cook a slice of pie with green filling, thus starting a dispute between the two. After arriving at the Owl House and finding them arguing, King decides to settle the debate with a bake-off. During the cooking, Lilith adds a mysterious green spice to her dish. When the dishes are ready, Eda opens her oven and her dish screams before giving a mischievous smile, and when Lilith opens her oven, her dish ends up growing into a giant cake monster. After having devoured Eda's dish, the monster starts chasing everyone in the house to do the same to them, and after several failed attempts to defeat it, Hooty trips it while chasing the others, causing it to explode all over the kitchen, as well as releasing Eda's dish. Luz enters through the kitchen door and tastes the pie crust, finding it delicious, which causes Eda, Lilith, and King to be stunned. 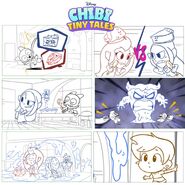