The Owl House Wiki
Register
Don't have an account?
Sign In
Advertisement
in: Shorts, A to Z, T,
and 2 more

August 25, 2021[1]
"The Dollhouse" is an unreleased animated short of the The Owl House short series, Owl Pellets.

Luz jumps onto the couch and switches on the crystal ball to watch TV. A commercial appears, featuring Tiny Nose advertising her stall "The Dollhouse" at the market. Tiny Nose has dollies for every occasion, and she assures the viewers that they are not cursed. She then goes on to say that the dolls are perfect for various occasions, asking who wouldn't want to receive a definitely not cursed gift like this. Just then, the head of the doll appearing on screen stops spinning, and its eyes start glowing red. Disembodied whisperings can also be heard. Tiny Nose pushes the doll aside, frantically begging someone to come help her get rid of the dolls, saying that she will do anything (including paying) for someone to do it, and swears that the dolls aren't cursed. Suddenly, a hand appears and presses itself atop Tiny Nose's head. The large doll behind the stand leans forward, and roars at Tiny Nose.

The feed then abruptly cuts out and the screen turns black. At the same instant, King comes back to the Owl House, telling Luz she won't believe what they are giving away at the market; he has brought back three dolls, and one of them bears an eerily striking resemblance to Tiny Nose. The doll whispers, begging someone to help her. Upon hearing that, Luz takes out a dagger. 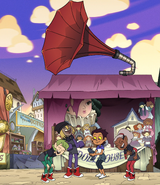 The stall in "Once Upon a Swap".