Hi, I'm Vale. I like Hunter a lot. On this page you will find all sorts of information about me.

Been watching the show since around mid-season 1, I love it especially for the good representation it has. Hunter is my favorite character, I love the whole mystery that surrounds him, his personality, his design, relation to belos, etc. I'm really enjoying Season 2b so far, every episode has been great.

I'm not usually one for ships, but here we go anyway, in no particular order:

See User:ValeofVoid/Renders for a collection of my renders. 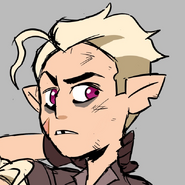 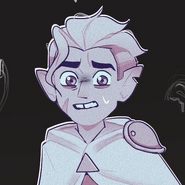 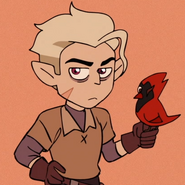 May 23, 2022-present (Cropped screenshot from "Clouds on the Horizon") 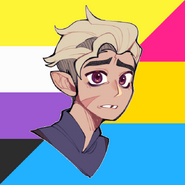 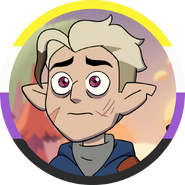 In this section I will detail some parts of my history, mainly while under this username, and on this wiki, but including some other things as well. This section is written in the first person, and is written in an almost formal manner, similar to how most wiki pages are written. It is currently in progress. I will update it periodically to include new things that occur (which I consider important enough)

On February 25, 2018, animation youtuber Vailskibum94 uploaded a video[1] discussing the recently announced animated series, The Owl House, and Amphibia. Being a fan of the youtuber at the time, I watched this video and became interested in the 2 series, partly due to my love for Gravity Falls, which ended 2 years prior. I also was really intrigued by the premises of both shows.

On August 9, 2020, I rediscovered The Owl House on twitter, and throughout August I watched the series up until "Agony of a Witch".

On September 3, 2020, I watched the Season 1 finale, "Young Blood, Old Souls". Due to school starting up, I sort of forgot about the show for a while.

Ironically enough, almost exactly a year since I first began watching The Owl House; on August 5 2021, I saw Dana Terrace's promo for the upcoming episode "Eclipse Lake"[2]. I panicked and decided to rewatch all of Season 1 again, and then the first 8 episodes of Season 2. I later watched Eclipse Lake when it aired on August 8, and "Yesterday's Lie" when it aired on August 15, 2021. After the fact, a hiatus began.

On August 25, 2021, I decided to join The Owl House discord server (featured on this wiki). I was tempted to begin editing, but I was still reeling from the events of the months prior involving another wiki, so I decided against it.

In April 2022, The Owl House and Amphibia began airing again. This inspired me to rewatch The Owl House in preparation for Season 2B's episodes. I skipped some episodes in Season 1, ("Really Small Problems", "Once Upon a Swap") but I ended up catching up to the then most recent episode, "Follies at the Coven Day Parade", which I found to be a mediocre return after the preceding hiatus. The coming episodes would only increase in quality, though.

On May 4, 2022, I began creating renders for The Owl House Wiki. I would continue making renders fairly consistently until May 18, 2022, where creation of renders would slow down.

Community content is available under CC-BY-SA unless otherwise noted.