Wendie Malick (born December 13, 1950) is an American actress and former fashion model, known for starred in the sitcoms Dream On and Just Shoot Me!

For The Owl House, she voices Eda Clawthorne.

Malick was born in Buffalo, New York to Gigi and Ken Malick. She graduated from Ohio Wesleyan University in Delaware, Ohio, where she went off to begin her modeling career. 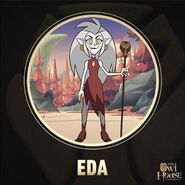